PRENOTE: A second small yet successful demonstration for the rights of people with ME/CFS was just held. A key goal of these mini-demos is to inspire more of the same; we hope you (those who are able) will hold a mini-demo, too. Only 1-5 people are needed to pull one off, get some press attention and make some waves. Make your own signs, or we can send you our pre-made 25-foot banner. All 3 goals of this Mini-Demo Strategy are found below.

WHO CAME:  On May 25, 2011, an ME/CFS public demonstration was held in front of the U.S. Department of Health and Human Services (HHS) Region 9 headquarters, in San Francisco, California. Despite the rain, eleven people came: two people with ME/CFS, Susan Kreutzer and Andy Au; three family members (mother, mother-in-law, spouse), including the protest co-organizer, Bobbi Ausubel; and six able-bodied friends. The multicultural group included people of Asian, Latino and Caucacasin decent, gay and straight, young adult and seniors. The people with ME/CFS came in spite of all the obstacles and barriers this illness throws in their way.

SETTING UP:  At 1:30 pm, the protesters positioned themselves on the busy, highly trafficked sidewalk in front of HHS Region 9, also known as the Federal Building. They unfurled a 25-foot banner that read: "Obama, Sebelius, HHS: Shame on you for abandoning 1 million sick and disabled Americans with ME/CFS and XMRV (Chronic Fatigue Syndrome and a newly discovered retrovirus). Clinical trials now!" (This banner was first used on May 10th at HHS national headquarters in Washington DC: http://cfspatientadvocate.blogspot.com/2011/05/hhs-demonstration-may-10-2011.html).

SECURITY:  Security came out immediately in the form of one person. He appeared to be the Head of Security for the Federal Building/HHS. Bobbi told him what they were doing and how she had been told by the city police that they could be on the sidewalk without a permit, as long as they didn't have a loudspeaker. The security officer agreed, took some of the demonstrators' literature and went back inside. It was all very relaxed.
PRESS:  The protest co-organizers, Bobbi and Rivka, a mother/daughter team, had spent the days prior reaching out to the press. Success! The New York Times reporter who has covered ME/CFS in the past came "to say hi" (no article expected, but good to keep relations going) and a San Francisco Chronicle reporter and cameraperson came as well. The resulting article is found here: http://www.sfgate.com/cgibin/article.cgi?f=%2Fc%2Fa%2F2011%2F05%2F25%2FBANA1JL1AH.DTL  Though this article was disappointing in the usual ways, its publication was still good news, as the SF Chronicle is one of the largest papers in the region. Plus, the reporter said she hoped to do an additional story on kids with ME/CFS. And to our knowledge, this is the first time an ME/CFS protest has made news in the U.S.

ACTIONS:  Standing in front of HHS with the banner for 1 hour, the protesters videotaped prepared and spontaneous statements (see resulting video), handed out flyers to passers-by and in a surprise action sang the song, "Clinical trials now!" (Also seen in this 2010 video: http://www.youtube.com/watch?v=8t1Xqp1LDxM).

HHS MEETING:  Also surprising, after the demonstration, there was a group meeting for a half hour with Eric Alborg, Regional Outreach Specialist of HHS's Region 9. His boss, who was out of the country, is Herb Schultz, the Regional Director of Region 9. In the hierarchy, Alborg is positioned directly under Schutlz. (Alborg's job main is to implement the new health care program.) Alborg had thought he'd be meeting with just one person, Bobbi, and had not known about the demo in advance. But after checking with someone (we don't know who), he agreeded to meet with the whole group, that is, the two protesters who have ME/CFS and their three family members. Alborg was open to listening and wanted to know why the protesters were there. People talked about the concerns and needs of people with ME/CFS (funding and clinical trials!). The demonstrators put the struggle regarding ME/CFS in the context of HIV/AIDS, linking the possible retrovirus connection (XMRV). This discussion made sense since HIV is historically a key issue in San Francisco, due to a large and politically active gay community. The protesters emphasized to Alborg that HHS should have an understanding of the politics of all this, due to HIV/AIDS. They also told him that the information about this demo, and the meeting with him, would not be limited to the small group he was presently gathered with, but would be rapidly disseminated all around the globe via the internet, and that ME/CFS was an issue that was not going to go away.
Alborg's suggestion to the protesters: 1) Call/lobby local institutions and legislators; 2) build coalitions with groups with other disabilities and chronic illnesses -- groups that have already-established power and influence. (Though he did not say it, one protester went away thinking HIV/AIDS and Autism groups).

Bobbi gave Alborg copies of a letter she had written with her own personal statement on top, followed by a list of basic needs/demands from our ME/CFS community. Bobbi's letters were addressed to HHS Secretary Sebelius, NIH Director Collins, NIAID Director Fauci and Schultz (Head of HHS Region 9). Alborg promised to make sure the letters were given to each.
Posted by Just a Puppy in the Mud at 1:23 PM 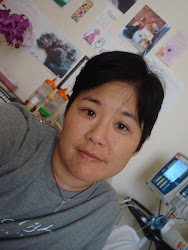 Just a Puppy in the Mud
Hello there, lovely person! I am a silly and serious person, dancer, writer, therapist, activist, friend. I'm particularly good at listening when you are talking about serious things and laughing when you are talking about funny things, mixing colors and convincing carrots to grow. I'm particularly challenged by stopping when I'm supposed to, sleeping through the night and putting things away. I have chronic fatigue syndrome, the Bad kind, and it has changed and made its best attempts to ruin my life. But one must keep soldiering on. So I do, paint brush in hand. Thanks for stopping by.